Atlanta 1996 marked the centenary of the modern Olympics and organisers hatched a top-secret plan for Muhammad Ali to light the torch at the opening ceremony.

The American had won a light-heavyweight gold medal in 1960 as Cassius Clay, before changing his name and becoming “The Greatest”, a boxer whose exploits in the ring transcended his sport to make him arguably the world’s most beloved athlete.

But 36 years after his triumph at the Rome Games, Ali’s once mighty body was wracked by Parkinson’s disease and he had not been fit enough to take part in rehearsals for the ceremony.

On the big night, the Georgia Dome crowd gasped in surprise as Ali emerged from behind a curtain in a white tracksuit, his arms and head shaking erratically.

As a global audience of three billion held its breath, Ali momentarily conquered his trembling to defiantly hold aloft the Olympic flame before slowly lowering it to light the cauldron’s fuse.

“Tears of joy flowed easily and generously from the eyes of many spectators,” the Olympic Museum said.

Ali also received a new medal during the Atlanta Games to replace the original that he furiously threw into the Ohio River after returning home from Rome as an Olympic champion, only to be refused service in a racially segregated restaurant.

Americans Tommie Smith and John Carlos were determined to make a statement about racism after coming first and third in the men’s 200 metres in Mexico City — what followed became an iconic moment in Olympic history.

As “The Star Spangled Banner” played, the pair stood on the podium shoeless and bowed their heads, then each raised a gloved fist in the gesture universally known as the Black Power salute.

The silent protest prompted boos in the crowd and Olympic chiefs slammed the politicisation of the Games as “a deliberate and violent breach of the fundamental principles of the Olympic spirit”.

Smith and Carlos were suspended and kicked out of the athletes’ village.

The reaction was even stronger when they returned home to an America still reeling from race riots and the assassination that year of Martin Luther King.

Smith and Carlos were subject to anonymous death threats and US sports officials ensured they never raced for their country again.

But their action resonated with the black community and today it is recognised as a civil rights milestone.

The third man on the podium, Australian silver medallist Peter Norman, had insisted on wearing a civil rights badge in solidarity with the Americans.

He too was vilified, frozen out of future Games selection and, until recently, airbrushed from Australian Olympic history.

But Smith and Carlos never forgot his support and they were pallbearers at Norman’s funeral in 2006. 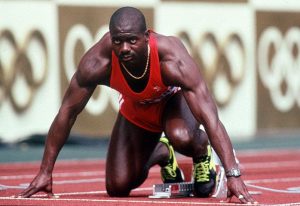 Ben Johnson’s steroid-assisted victory in the men’s 100 metres final in Seoul revealed for the first time the scale of the doping problem facing modern sport.

It became known as “the dirtiest race in history”, with six of the eight finalists eventually implicated in drug scandals.

The focus heading into the final was squarely on the contest between Canada’s Johnson and his hated rival Carl Lewis of the United States.

But Johnson was untouchable, exploding from the blocks to blitz the field in a world record time of 9.79sec, even taunting Lewis with a raised index finger gesturing “number one” as he crossed the line.

Three days later he was stripped of his medal, his time and ultimately his career after it was announced that he had tested positive for stanozolol, a banned anabolic steroid.

Other Olympians had tested positive before, but never the winner of one of the Games’ top events.

It was a revelation to the sporting public, if not administrators, creating what Britain’s Guardian newspaper called “a legacy of cynicism” that persists today when an athlete completes a stunning performance.

Johnson himself faced a huge backlash in Canada and was reduced to racing horses and stock cars at charity events.

He has campaigned against drugs in sport in recent years, although he still complains he was unfairly singled out and “crucified” in an era when doping was rife among his rivals.

The 1980 Moscow Olympics were overshadowed by Cold War tensions when the United States led a 65-nation boycott in response to the Soviet Union’s invasion of Afghanistan a year earlier.

There had been boycotts before — more than 20 African nations pulled out of the previous Games in Montreal over a New Zealand rugby tour to apartheid-era South Africa — but never on such a scale.

Only 80 nations participated in Moscow, with 6,000 athletes competing, down from the 10,000 originally expected.

While designed to send a message to Moscow, the boycott prompted furious debate in the Western world over the politicisation of the world’s largest sporting event.

Critics said athletes who had been training for years for a shot at Olympic glory were only being punished by a ban.

As a result, close US allies such as Britain and Australia sent teams after their national Olympic committees resisted pressure from their governments to boycott.

The move was divisive even in the United States, with Washington threatening to strip the passports of any athletes who defied their government and went to Moscow.

The US State Department notes the boycott did not change the Politburo’s Afghanistan policy.

“In actuality, the Soviet-Afghan War continued and did not end until 1989,” it noted.

The Soviets reacted to the boycott by retaliating with a communist-bloc ban of their own at the 1984 Games in Los Angeles.

Revellers were enjoying a rock concert at Atlanta’s Olympic Centennial Park when a pipe bomb exploded in the early hours of July 27, 1996, killing two people and injuring more than 100.

US president Bill Clinton said the “evil act of terror” would not be allowed to derail the Games and vowed those responsible would be brought to justice.

Within days, anonymous law enforcement sources named the prime suspect as Richard Jewell, a security guard who had spotted a suspicious package and began clearing people from the area before the explosion.

In fact, Jewell was innocent and authorities later conceded his actions probably saved many lives, but he was hounded relentlessly and left a broken man before the FBI formally cleared him.

The real bomber, Eric Robert Rudolph, was identified in 1998 after a string of bombings on abortion clinics and a gay nightclub.

He hid for years in the mountains of North Carolina but was arrested in 2003 and sentenced to life without parole in 2005.

Gunmen from the radical Palestinian Black September group broke into the Israeli team’s flat at the Munich Olympic village on September 5, 1972, sparking one of the Games’ darkest chapters.

They immediately shot dead two athletes and threatened to shoot a hostage every hour unless 232 Palestinian prisoners were released.

West German police responded with a bungled rescue operation in which nine more Israelis were killed, along with five of the eight hostage takers and a police officer.

The news sent shock waves through Germany just 27 years after the Holocaust and opened a deep rift with Israel, where it was felt police had not taken enough steps to prevent more deaths during the rescue.

“The Games admittedly went on but their spirit had been murdered,” fencer Yehuda Weinstein, who was in another apartment and escaped over a balcony, later said.

British sprinter Derek Redmond brought Barcelona’s Olympic stadium to its feet when he tore his hamstring but stubbornly insisted on finishing his race, supported by his father Jim.

Redmond had experienced Olympic agony four years before in Seoul, when his Achilles tendon snapped just minutes before he was due to race.

After numerous surgeries he appeared back to his best in Barcelona and cruised through the 200m preliminary rounds, only for his hamstring to go in the semi-finals.

Determined to finish this time, he pulled himself up from the track and began dragging himself around the course one-legged, waving away medics.

Father Jim was watching from the stands and vaulted the barricades to reach his weeping son, wrapping his arms around him and helping him hobble to the finish line.

“When I got there he insisted on finishing the race, so I said to him, ‘we started your career together and we will finish it together’,” Jim Redmond later recalled.

Redmond senior said his father’s instinct kicked in and he initially didn’t understand the fuss following the standing ovation they received upon crossing the line.

“Now I can see that we brought into the Games, the spirit of the Games, but at the time it was just what a parent does,” he said.

“He didn’t win a medal but he won the hearts of the world.”

Eric ‘The Eel’ Moussambani flailed his way into Olympic history with his inept but dogged performance in the 100m freestyle in Sydney.

Moussambani, from Equatorial Guinea, had only taught himself to swim eight months before the Games and had never seen a 50m pool before arriving in Australia.

His heat began bizarrely when his only two rivals were disqualified for false starts, leaving Moussambani to swim by himself in front of a 17,000-strong crowd.

His technique, which more closely resembled doggy paddle that the slick efficiency of freestyle, initially caused ripples of laughter in the stands.

But cheers of encouragement followed as Moussambani continued churning through the water as concerned lifeguards stood ready to pluck him from the pool.

Gasping for breath, he finished in 1:52.72, the slowest 100m recorded at the Games, more than double the time of the other heat winners.

Moussambani gained instant celebrity and a short-lived sponsorship from a swimwear manufacturer, returning to the London Games in 2012 as his country’s swimming coach.

He came to embody the sentiment of the founder of the modern Olympics, Baron Pierre de Coubertin: “The important thing is not winning but taking part.”

Amaechi gets another appointment from Buhari

Citizen Confidential is a media publication in Nigeria with the mandate of ensuring and safeguarding citizens freedom to speak.
Contact us: info@citizenconfidential.com

What Is The Duty Of LASTMA?